It's in the Eyes

The expression of anticipation in the boys eyes when I begin a Bondage and Pain experience with him often tells me where to take him. Sometimes there is fear, sometimes his eyes are wide open and shifting about as I work on him and sometime, but rarely, he is complacent and appears emotionless.

I tied the boy with the new techniques a few days after I returned from Germany. His eyes were wide open with anticipation of a new experience. I had him sit on a work table and began the session by wrapping his right wrist as an anchor that I pulled behind his back to his neck. I wrapped the rope around his neck, building a snug coil. I hoped that I would see a level of fear but the boy sat quietly, anticipating the next step in my dance. I continued weaving the rope around his torso. The rope tightened itself as I continued, reducing his ability to expand his chest to breath.

He was unable to move except to wiggle his toes and fingers.

I tied a monkey paw from rope to gage him then sat back in a chair to admire my work and watch his feeble attempt to struggle.

I later climbed on to the table and removed his gag so that I could face fuck the boy.

His eyes widened with wet panic as he choked on my cock. His nose started running as he swallowed harder and harder, working to please me.
Posted by Master Ian's Slave at 10:50 AM 1 comment:

To answer your question. I know he feels the same. Bondage is so much a part of the boy's needs that he probably thinks about it a hundred times a day.

It is amusing to spy on the boy during his day. He and his friend are having a fantastic time together. They are animated and fooling around almost constantly. Sometimes it looks like they are bent over from belly laughter. Boy gets that way sometimes and when he does he sounds a little bit like a little kid. The sad thing is that he will suddenly stop and anxiously look around to see is someone will slap him or tell him to shut up. (His mother did  that to him).

He had a few intense nightmares concerning his family during the week before he left for Bhutan. I both dreams, he was responsible for cleaning up after his family and the mess they main. While sleep walking during his last dream he shouted "I"M NOT RESPONSIBLE FOR THIS MESS. I don't have to clean it up!" then he went back to bed and I crawled in beside him. While still sleeping he pulled my leg and arm over him and snuggled his face into my arm pit.

We talked about his dream the next morning.
"Ya know", he said. "I dream these family dreams and always feel guilt. Did I ever tell you that my aunt Marrian told me that it was my fault that my dad killed himself and my older brothers?". He had, I am tell him that he was not responsible and that his aunt was bitter with anger. "Ya know", he said. "Every time I think that I'm going to tell myself "I didn't make the mess and I'm not responsible for it". Somehow or another, he seemed lighter in those last few day before he left and from what I can see he is having a lot of fun.
Posted by Master Ian's Slave at 5:48 PM 2 comments:

Fucking That Fucking Hole in the Airport Restroom

I'm going to Fuck my slave's hole in the airport restroom then drive him to the condo and fuck his hole and then I'm going to dry hump him. Two more fucking weeks!
Posted by Master Ian's Slave at 3:40 PM 1 comment:

It really gets my jiz boiling when I see well done bondage that shows the top as invested in learning esthetics of the art. It can be as simple a rope neatly wound around wrists or a pair of handcuffs applied correctly. Bondage does not have to be severe to be beautiful.

I had a dream about Trace last night that was based on a real incident.  We were in a leather bar. I was talking to a buddy and Trace was standing next to me. A hot looking guy stopped to talk to Trace as he walked through the crowds of men. Trace greeted him as he would a friend and tapped me on the arm to get my attention. Trace introduced us and then I turned to my buddy again. Several minutes later, I felt Trace starting to feel anxiety. As I often do. I put my hand over his mouth and turn his face into my chest, hold his nose closed, tell him to breath then release his nose, forcing him to breath deeply and slowly through his nostrils.

The dream seemed so real that I woke from it feeling disappointed that it was just a fleeting dream. I felt uneasy about him. I studied the GPS then called him. He was fine but he said that he thought of me and felt anxiety about being so far away from me.

I never, never thought that I would be this dependent on another person for so much of my happiness.
Posted by Master Ian's Slave at 4:39 PM 1 comment:

I can watch the boy move, almost in real time. I know he is doing well.

There is much ado here on the Ranch. We all have busy hands, tired backs and we're sleepless. The animals are all whelping at the same time. We've had a vet here for the past 24 hours. We have three Alpaca Cria and one Lama Cria. Helga, one of the mares gave birth to a foul that I named Krista. One of the cows also looks heavy. We do things the natural way here and allow calves to bond with the mothers.

The dogs that prefer living outdoors are doing fine. Tommy is obviously lost without his boy, I think Buddha is a little mournful too. Sancho and Pancha run to the door when they hear a vehicle start up the hill.

I think boy would love to have been here for the births but he is where he needs to be.

My right arm is getting a workout in the boy's absence.
Posted by Master Ian's Slave at 5:14 PM 1 comment:

The Airport in Paro

It is a nice airport but a timid traveler should keep the airplane window shade down or close your eyes tightly. Aspen, Colorado is hairy too.

Boy is on his way over mountains and through valleys off the highways. If you do a little research you will see that a modern highway connects major towns and the airport. As in most countries, the real beauty is found far off the easy path.

The boy is enjoying moderate temperatures.

Reggie has gone back to Napa, leaving me wanting more. I had fun but not nearly as much funs as when I am tormenting my slave.
Posted by Master Ian's Slave at 5:24 PM 1 comment:

By my GPS calculation, the boy is at the top of the world in the monastery above Paro, Bhutan. He will stay there for two days then begin his 3 week trek with his friend and spiritual guide.

Reggie is giving me hell and I am enjoying every moment of it. We're taking a break to relax and catch up with business in the office then we're going back at it.

Some Tumblr pics for your amusement: 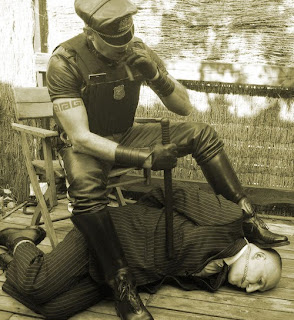 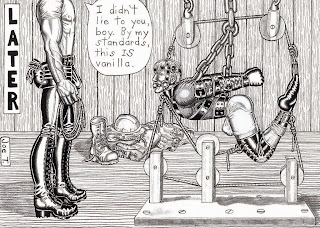 My slave is okay. He arrived in Paro, Bhutan safely. He's taking time to acclimate to the altitude before hiking to the monastery to meet his friend. I can actually track his movements to the square meter when he is not in a plane as well as call him via GPS.

Most or all of the seismic activity is west of Bhutan in Nepal. boy flew in from the east via Japan and Thailand.

As for me, I am entertaining Reggie for a few days as I assume my old role as slave to him. I don't do that when my slave is around. If I am any good at all at being the boy's Master it is because Reggie was a damn good Master to me. 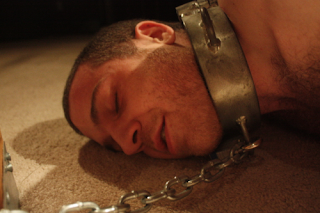 Bondage the Day Before the Left

One of my favorite Hoods to use on the boy is a hood that Jim Stewart made some time ago. Good heavy thick leather on the outside lined with Garment Leather. No holes except two punched openings at the nostrils. It's a bit small for the boy so it's a struggle to get it on him. I becomes a very tight second skin. He can't move his jaw at all so his mouth is forced closed. I put him in a leather straightjacket. It's black on the outside with kid glove blood red leather on the inside that clings when it get damp from sweat. All the buckles lock. I inverted him. He was wearing chaps and boots.

The boy was in serious shape, hardly able to breath and locked up cock. He'd been wearing the belt for well over a month without getting any relief at all through all of our sessions. I finally took it off. I can't have the boy trying to go through international airports with that thing on him. Not in the East. So I drew my belt from my jeans and let him know I was going to work him over with it. His ass was at a perfect height for a good belting.

I beat his ass to bruising.

I took him down and kept him bound. I bent him over the Australian Punishment Bench and beat his ass some more before I fucked him over and over until I had nothing left and my cock was sore. I wanted to give the boy something to think about during that very long trip to Bhutan.
Posted by Master Ian's Slave at 11:41 AM 2 comments:

It's Going to be a Long, Long Trek

I wish that I had something interesting to talk about. It seemed that we were all work and play but there is nothing new about that. We didn't do anything that we hoped to do exact take time to take time with each other without allowing for interruptions.

We didn't change the blog or the site and most likely won't until July.

I encourage my boy to take his trip to Bhutan to take his trek along with his friend. He should be arriving at the Monastery sometime soon but he is out of reach at the moment. He'll need to acclimate to the thin air for a few days before starting out. He'll have nothing with him beside the clothes on their backs, a change of underwear and dry socks. I think he might take his camera but he's more into memories than pictures. When he paints, he creates moods and impressions from memories.

He finished several paintings before he left and decided to turn the fleece from his animals over to a commercial facility this year. He's spending more time painting than any other activity in the studio.

Something on the kinky side.

from Tumblr
I saw this picture sometime ago and got all hard over it. I had some girls up in Canada reproduce except that every single buckle locks with a padlock and the hands will be restrained behind his back. The waist and chest cinchers have roller buckles for easy tightening. The boy hasn't seen it yet. It should arrive before he comes home.﻿

I know we said we wouldn't post until we got the new domain up and loaded but I saw this on Tumblr and had to share because it is my favorite position to be bound in. 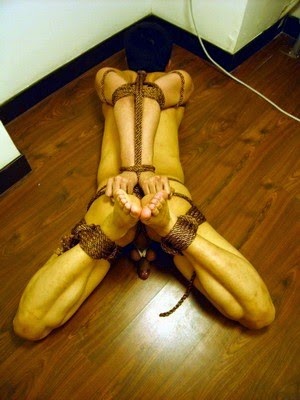