Master held my neck with one hand and covered my mouth and nose with the other until everything turned gray then black. I woke with his pole lodged deep, very deep inside of me. His hands were wringing my tits with all of his strength.

"That's enough", he said. "We're done with this shit. I'm not going to let you out of my clutches again. No more Chateau, not more trips without you at my side". He squeezed so tight that I felt he would crush my ribs. He kissed and bit me. I was sorry hungry for you.

Butch and Daniel went out before to spend the day getting lost in museums. Master took me to a coffee shop where we had caramel apple scones and coffee. I didn't pay attention to much to where we were after that but we walked until Master saw something in a shop window that he wanted to see more closely. It was a very nice shop that had security at the door. Our jeans and boots didn't impress him. He was a bit rude and snooty but he let us in. It impressed me as out of date to have someone like him at the gate.

Master made me try on a motor cycle jacket that was sumptuous and heavy weight and matching jeans with a Sam Brown belt. It looked like an original post WWII leather man might have left it behind. The shop keeper said the jeans needed to be shortened and that he could get it done by the time the shop closed. I don't know exactly how to describe the color except to imagine a Maxfield Paris blue night sky or the blue mixed with the near black color in the picture. 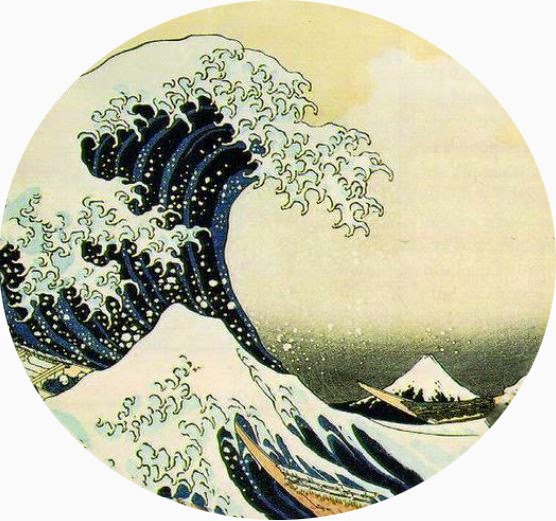 (BTW: I am having this image tattooed on my back. For everyone who knows the image, it is from the "Great Wave off Kanagawa" by Hokusai.
Master is finally allowing me to get it. I, with the help of Stevie Moon centered the circle in the middle of the image to create a Yin-Yang of fire and water. I am told by my acupuncturist and oriental healers that I am primarily a water type personality and body type with strong fire traits. Opposites for sure. Water is represented by the wave, fire by the volcano.)
We bought the jacket, shirt and jeans then went continued down the street. It seems I go through like asking for nothing material and getting...
There was a small protest against the EU and payments for immigrants. They preach that if the countries stop supporting indigent immigrants that it will slow the tide.
Master talked to me about storage. He has kept me bound in a closet several times recently and wanted to know how I felt about it. "It's cool, I've fantasized about being stored".
We had late lunch in a restaurant that played dreamy eastern music. Most of the food was vegetarian and either very spicy or tasteless.
Posted by Master Ian's Slave at 1:26 PM