It's been a few days.

I woke in the dungeon Sunday morning.  My ankles were chained together and to a ring in the wall. The chain traveled up to my collar with my wrists fastened to irons at about my lower ribs. I had a pillow under my head.  I realized that I was hugging the heavy chain as if it was a teddy bear.

Master and I have been together fulltime for nearly a year so it was a time to reflect on the and build goals for the future. Being submissive and dominant in the Master/slave lifestyle is not as simple as it seems in fiction.  But let me back up, being together was easy but building the relationship had it's fits and starts. We talked about the things I did not want before my month as his object and told him that I would submit willingly and completely to what he wanted. I promised to never complain, question him or ask for anything and I didn't.  I kept my promise. That was the basis of everything that followed, including events like the beating that he gave me last week. It was particularly rough and vicious but I've got to tell you that any time that he pulls that belt out, I am complete turned on and in a state of pre-cum drooling arousal and he knows it. He must have felt uncomfortable because he wanted to talk about it. I said, "did you notice that I came while you beat me"?

We dropped our roles for the afternoon.  Master became Ian and I became Trace. We walked our horses out to one of the stands of Eucalyptus and settled in the shade and talked. Master smoked a cigar and I lit my favorite Mario Grande pipe. We never seem to be able to hold a decent conversation because I end up moving close to him and he holds me so tight that I can hardly breath. I slide down to unbutton his jeans and take his cock into my throat until he decides to fuck me. It was exactly what happened. that afternoon.

I am happy with our relationship now that neither of us is afraid of committing to each other so I didn't see a reason to get involved with things I like or dislike and I asked him to do what he wanted. I think living the way we do helps us find balance and avoid guilt.  We play with other people but he keeps the keys.

Master re-lit his cigar and I filled my pipe again.  We spent a casual evening.  He gave me couch time and held my head while I lay on the sofa watching a movie.  My left ear was on his upper leg over his femoral artery so I could hear his heart beat.  We went to sleep together.

I walk in my sleep sometimes. I slipped out of bed while deep asleep and went outdoors and started walking down the drive toward the road.  I was naked and barefoot.  Christian caught me and brought me back to the house and woke Master. They strapped me into a straightjacket, wrapped tape around my mouth and chained my feet.  That is the way I spent the rest of the night. 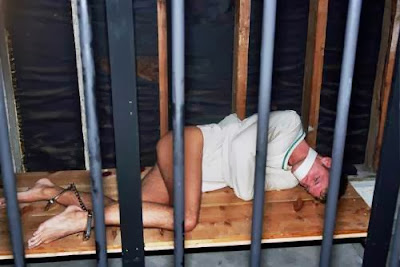