We're in Strasbourg.  We found a suite at the Regent Petite.  It's been since high school since I've been to Provence during the winter.  We dined at a restaurant that seemed to be popular with gay people. 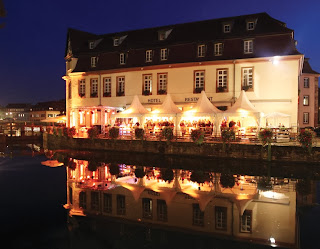 We sat next to a table of four guys. They were skinny guys with leather accoutrements. They were funny because they tried to be butch but they behaved more like raving queens trying to imitate tough masculine guys.  They ate like birds. The portions that they shared were already small, yet they managed to leave more of their meal on the plate than they ate. They ordered one slice of cake to share for dessert. Each had a small bite and then they left the rest behind.

We saw them as they stood outside the window trying to light their cigarettes in the wind, as if their lives depended on them.

We had to laugh at their stupidity.

I zonked in the car this afternoon sometime after lunch in Stuttgart.  I visited my distant cousin who is a Military Policeman somewhere near by. I just happened to catch him on his day off. He's living in what looks like 1960's military tenement housing with his wife and two kids. I think he could use my help. He wasn't very appreciative when I introduced Master as my partner but considering that he grew up brainwashed by the likes of Baptists, I can't fault him.

I hate falling asleep in the car. I miss too much of the countryside.


I crawled out from under him long enough to catch my breath. It's five? in the morning and much too early to stay awake.